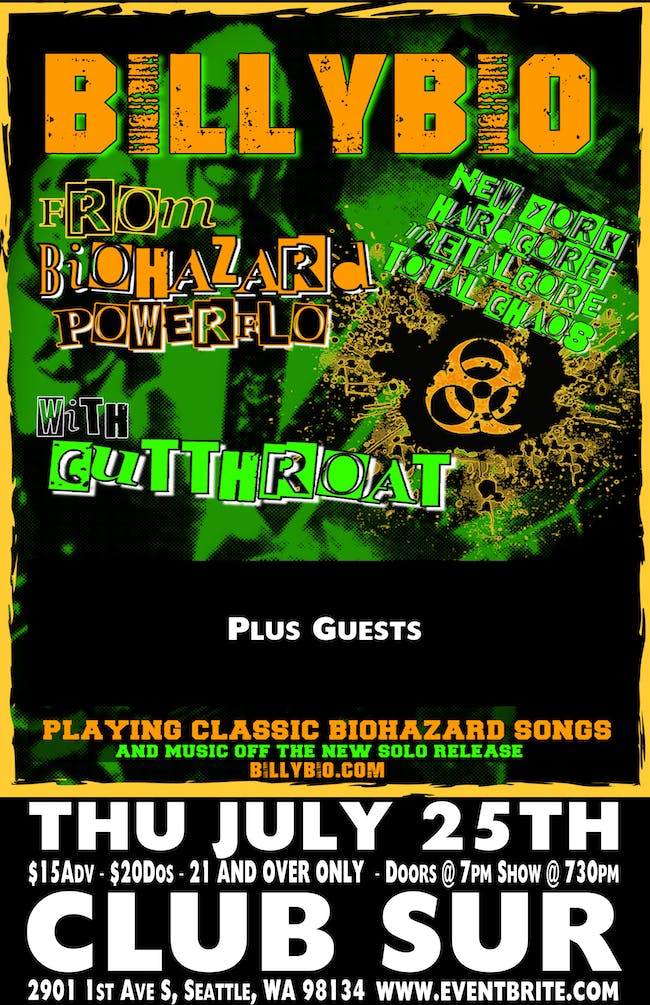 Music has always been the central, unifying force in Billy Graziadei’s life. Early musical training took place on the Graziadei family’s old, forever out-of-tune upright piano. Billy’s desire to explore all forms and variations of music did not balance well with the authoritative doctrine employed by most of his music teachers. Rebelling from this rigid view of music, Billy began studying music under the guidance of his Grandfather and Uncle, both of whom he had always admired.

Billy continued to study piano and expand his musical vocabulary while growing up, finding inspiration in so many forms of music but it wasn’t until he stumbled into the underground world of punk-rock music that his musical taste was really sparked into growth.

Immersing himself in the sounds, perspective, and culture of the punk underground, Billy’s desire to create new, innovative music led him to the late 80’s hardcore scene in New York City. Sunday matinee hardcore shows at CBGB’s…Friday night metal shows at Brooklyn’s Lamour rock club. It was here that Billy found his musical home and it was here that Billy helped form a band that would take the metal/hard-core scene by storm….it was the birth of BIOHAZARD.

BIOHAZARD combined the urban sounds of hard-core, metal and rap with scorching lyrics describing the forces at work in our modern urban lives. With an impressive career spanning over 20 years with 10 albums (on both indie and major labels), the band sold over 5 million records. With an audio engineering degree and years of experience recording Biohazard, Graziadei opened what would eventually become Firewater Studios. This studio became an incubator for Billy’s creativity, where he continues to cultivate his talent while producing up and coming bands.

After years of touring, collecting experiences and stories to fill a lifetime, Graziadei ventured off to start a new group known as SUICIDE CITY.

Suicide City was born in the cold winter of 2005. Graziadei brought together Jennifer Arroyo (ex-Kittie) on bass, singer Karl Bernholtz and guitarist Aj Marchetta from South Florida’s The Groovenicks along with Long Island’s skin basher Danny Lamagna. Drawing from his early Biohazard experiences, the “old” school musician applied his DIY work ethic that propelled his first band forward in the early days. Without the help of a label, distribution or management, Suicide City released their ep entitled, “Not my year” and sold over 8000 copies to date. With constant touring with bands such as Danzig, Mindless Self Indulgence, Taking Back Sunday, Gwar, The Horrorpops and Otep to name a few, the musicians have been paid their dues earned fans the real way, by kicking ass on stage! Suicide City went onto release their second studio effort on The End Records in 2005. The band began touring less and less and eventually split up thereby freeing up Graziadei for a Biohazard reunion with the original members in 2008.

In early 2009 Boston hardcore band Blood for Blood approached Billy about joining the band in replacement for their second vocalist and guitarist. As a fan of the band and having watched the band come up since their inception, Graziadei joined the band and a world tour was announced. Spending most of the next several years touring with both bands, Billy found himself inundated with creative energy and would spent endless time in the studio working on new music, ideas and material. The Biohazard reunion eventually found the band back in the studio to work on an album that would eventually be entitled, “Reborn in Defiance”. Soon after it’s release and after some internal drama within Blood for Blood, Graziadei left the band to dedicate his full attention to Biohazard.

After the departure of Evan Seinfeld from Biohazard, Graziadei put even more energy into rebuilding the band and with the addition of Scott Roberts on bass and 2ndvocal duty, the band was accepted worldwide!

With the success of Powerflo and Sendog releasing a new Cypress Hill record, Graziadei found it a perfect time to release his first solo cd under BillyBio. With an incredibly successful tour supporting Life of Agony, Graziadei landed a deal with AFM records with a planned release of “Feed the Fire” due out Nov. 30th, 2018.